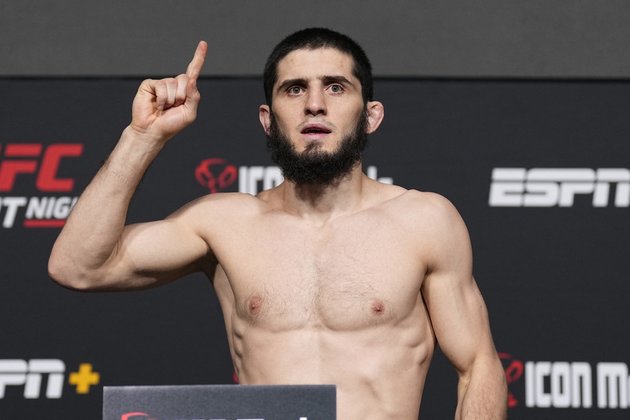 Islam Makhachev says Charles Oliveira wanted to avoid their UFC lightweight title showdown, vowing that he will be the toughest test that the Brazilian former champion has faced when they collide in the main event at UFC 280 in Abu Dhabi later this month.

Russia's Makhachev will be aiming to follow in the footsteps of friend and mentor Khabib Nurmagomedov by capturing the vacant 155lbs crown when he faces off against Oliveira on October 22.

Oliveira was the man to succeed the retired Khabib as the UFC's lightweight ruler, winning the title by defeating Michael Chandler in May of last year before defending it against Dustin Poirier seven months later.

But the Brazilian was stripped of his crown on the scales before his most recent showdown with Justin Gaethje at UFC 274 back in May - even though he went on to win the bout with a first-round submission.

Oliveira is riding an 11-fight winning streak heading into his match with Makhachev - although the Russian has compiled a 10-fight undefeated run of his own to earn his shot at UFC gold.

As the clock ticks down to their Abu Dhabi blockbuster, Makhachev outlined his plan to be the first man to defeat Oliveira in almost five years - while asserting that the Brazilian has had things all his own way throughout his winning streak.

"You have to make him feel uncomfortable. All his defeats in the UFC are when he went into deep waters, when the pulse is already over 200," Makhachev told Russia's Match TV.

"In his current winning streak, there were no tough fights, he could take [his opponents] down and calmly control [them].

"There was no person who could calmly wrestle with him or resist his grappling. In comparison, Tony Ferguson had good jiu-jitsu and was able to fight Charles all [three] rounds."

Makhachev acknowledged that Oliveira had improved his stand-up game to complement his ground skills, but noted that his own training had involved sparring with some strong strikers.

"[Oliveira] improved, yes. Previously, he used only jiu-jitsu, but now he's become good on the feet.

"But I spar with Usman [Nurmagomedov], with Sharip Zaynukov. These are guys from Thai boxing," said Makhachev.

Makhachev's sole blemish in his 23-fight career is a TKO defeat to Adriano Martins back in 2015 - something which the Dagestani said taught him a valuable lesson.

"I think that I basically grew up from that moment as a fighter... I realized that in MMA, there are small gloves and it's worth being a bit more careful," said the 31-year-old.

Makhachev's friend, teammate and mentor Khabib suggested in an incendiary social media post last month that Oliveira could even fail to turn up in Abu Dhabi for the title showdown.

Makhachev himself said he was expecting the Brazilian to be facing him in the Octagon come fight night - even if he accused the 32-year-old of doing his best to avoid him along the way.

"But Oliveira avoided this fight so much, he wanted to move it to Brazil so much. He wanted some kind of 'money fight' for himself. And he was ready to fight earlier, to call out Conor McGregor, Nate Diaz.

"When he was told that he needed to fight Islam, he began to change the time, to try to transfer this fight to Brazil, or think of other excuses.

"I think they just told him they would find a replacement, especially since he's not the champion now.

"I even heard that they wanted to offer this fight to Chandler for the vacant title. And then Oliveira immediately signed the contract," added Makhachev.

Makhachev will boast the formidable presence of Khabib in his corner in Abu Dhabi - a font of knowledge which has been noticeable during Makhachev's victories over the likes of Dan Hooker.

Makhachev said his friend-turned-trainer's input would likewise be a big boost against Oliveira.

"Yes, there will be Khabib and Javier Mendez [in my team]. We'll see who else. If Khabib is in the corner, it's +10 for wrestling, for striking, for tactics," said Makhachev.

Khabib, Makhachev, Mendez and their entire team will be hoping that Dagestan has its latest UFC champion when business is settled on October 22 in Abu Dhabi.